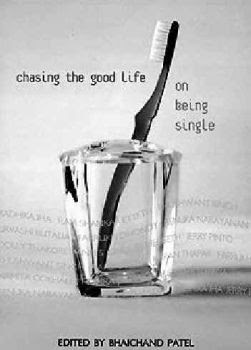 while on quest for singleton woos and boos... I endup reading Bhaichand Patel's Chasing the Good Life : On Being Single, a Mono of Single Life.. lively and varied volume of essays brings together the thoughts of more than two dozen Indian men and women on life as a bachelor, spinster, divorcee, widow, widower — and even husband or wife.

One category well represented is of those who could be described as defiantly single: they insist they have absolutely no regrets about being unmarried and even revel in their single status. but others(Rahul Singh/most of older writes) who see their single status as something that can be coped with but is not a cause for celebration, who are the most convincing. The life of a married single that Sheela Reddy describes is probably best only for those who are ambivalent about the charms of their spouse since you cannt avoid wondering why bother to get married at all..??

Among them is Asha Narang Spaak, who in her contribution Bathrooms Are Not for Sharing, delights in being able to spend hours doing the newspaper crossword or watching the wildlife in her garden. But can't you do all these things and more if you are married?

India's grand old man of letters, Khushwant Singh, contributes an amusing, if a touch self-indulgent essay which looks at being single from a completely different angle from that of the other writers. Singh, a widower, finds that for him the pleasure of being alone is that you can break wind — or be offensive in any other way you choose — without anyone caring.

It could be great if author could have captured views from Ratan Tata, Mr. President APJ Kalam..! cannot avoid wondering what they were thinking...!! Two-thirds of the essays in this book are written by women and some of them, plus one or two male contributors, fall into the assumption that singlehood is somehow trickier for women than it is for men. There are several reasons why this might be the case, often related to societal scepticism that manifests itself in, for example, difficulty in finding accommodation or even outright and blatant ostracism. In addition, the biological clock ticks more rapidly for women than for men. However, the reverse case — that men might have to deal with particular difficulties when they are single — is not properly put, which is a shame.

one conclusion to be drawn from this book it is that single people are anything but a homogenous group who share the same values, interests and problems. There are as many ways of being alone as there are of being in a couple.

Proud of me: If anything I can credit my international-exposure- and-happy-go-lucky-backpacker-attitude has given me; is habit of acceptance & not pre-judging... whether its same sex relationship or no relationship - all is good, if no harm for other and happiness for you (ofcourse by having self-defined values & ethics). I treat each day at its merit.

having said that.. I know, Life is not always about choices, fortunately or unfortunately its about priorities...
Posted by Unknown at 4:21 PM

liked the way you have analysed the single pieces.

also your own single attitude.

this line stands out!!
I know, Life is not always about choices, fortunately or unfortunately its about priorities... 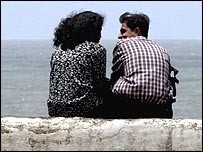